In the 18th century, the church will become more architecture-like. In this period, a church that was often built was clasified in the type that two towers stand on both sides of the entrance facade and the another type that the entrance facade is surrounded by a U-shaped frame to regard as a big gate. Perhaps the latter is probably because the twin towers lost the substance and eventually integrated with the eaves.

The method for applying soil on a adobe is the same as the San Jose de Laguna Mission and the San Miguel Mission, and the plan is not very different so much. Nonetheless, the impression of the church looks quite different by the effect of a firm facade. A balcony often appearing on the facade is also peculiar to New Mexico, according to "New Mexico Architecture - Stone, Earth and Light Church" (Yoh Hakomori, Izuru Ichihara). Though it got closer to the colonial style’s architecture, this kind of church is also the locality of only New Mexico not seen in other region.

I had no opportunity to see the church of the U-shaped frame this time but two twin tower type's churches around Taos.

The San Francisco de Assis mission famous from Georgia O'keefe’s painting stands on the square of Rancho de Taos. The residents of World Heritage site, Taos Pueblo, moved here to avoid the attacks of the Komanci tribe and develop a village surrounded by a fortress in 1716. The completion of the church which started on a construction in 1772 was around 1815 and José Benito Pereiro of Franciscan Order directed.

As well as a gentle façade, the charm of this architecture is an adobe's buttress. The noticeable part is an organic part of buttocks rather than a front buttress integrated into the facade. It supports the wall of the angular body like a foot of a fur seal. The face is a pretty girl, but the body and leg are fat. Its unbalance is heartwarming and friendly. The wall polished mixing grass with sheep's skins goes together with the surrounding earth.

In the interior of the cross shape, usually the width of a believer seat of a nave is the same as that of an apse with the altar. But, in this church, only the width of the apse narrows to nearly half beyond the transept and the white walls stand on the left and right sides. When the believer see the apse from the seat, a blatant white wall strongly enters the eyes. It cuts off the effect of the space, and, in addition, a diagonal brace crosses the front in a sudden. It is a mysterious design.

Apart from the interior that I waver in evaluation, the main altar and the altars in the transept are splendid. Eight paintings of the altar are thought to originate from Spain, while the altar itself was created by New Mexican producer Moreno at the beginning of the 19th century.

Here I have met two colors associated with Catholic. In the main altar, green and red color are mixed in well balance, while, in the altars in the transept, the black line on the red ground is vivid. Those bring the Spanish Romanesque style paintings to remember. Green leaves dressed in the red altar's Christ image are said to be the influence of indigenous culture.

The first building of the San Geronimo Mission standing in Taos Pueblo was completed in 1619. In 1680, in the Pueblo Revolt that indigenous people uprised against the colonial government, it were destroyed by indigenous people, but the next church rebuilt was also destroyed by the American army attacking indigenous people who entrenched in the inside in 1847. After that, the current church was rebuilt in 1850 in the different place. The churhc found its place finally after the harsh history transition.

Every time it was rebuilt, the refinement of style would be progressed ? The buttress of buttocks in the San Geronimo Mission is more ordered than that of the San Francisco de Asis Mission since the buttress is arranged neatly adjusting to the facade. The difference of the color that the center part of the building facade was finished in white might be according to the renovation. The combination of two colors is also applied to the atrio’s wall. Among the buildings of Taos Pueblo polished with mud color on a complicated volume, the white color, the shape with less irregular line and the stoned atrio’s floor emphasize that here is the special place.

The interior was more usual than I imagined and has not much attraction compared with otehr three churches introduced already.

Finally, introduce the Rollette Chapel in Santa Fe. It is built by the Gothic Revival style unlike a so-called New Mexico style. The real attraction for me is neither the miraculous spiral staircase made without using nails nor the architecture that doesn’t seem to mimick the Sainte-Chapelle in Paris but the altar imitating the Gothic cathedral. In the architecture of the Gothic Revival style is the altar of the same style as an inner-box-of-nested box structure.

Hiroshi Unno writes on the Gothic Revival style as the source of Art Nouveau in "The World of Art Nouveau”. The statue of this altar is a beautiful Art Nouveau style. I might discover the good example. 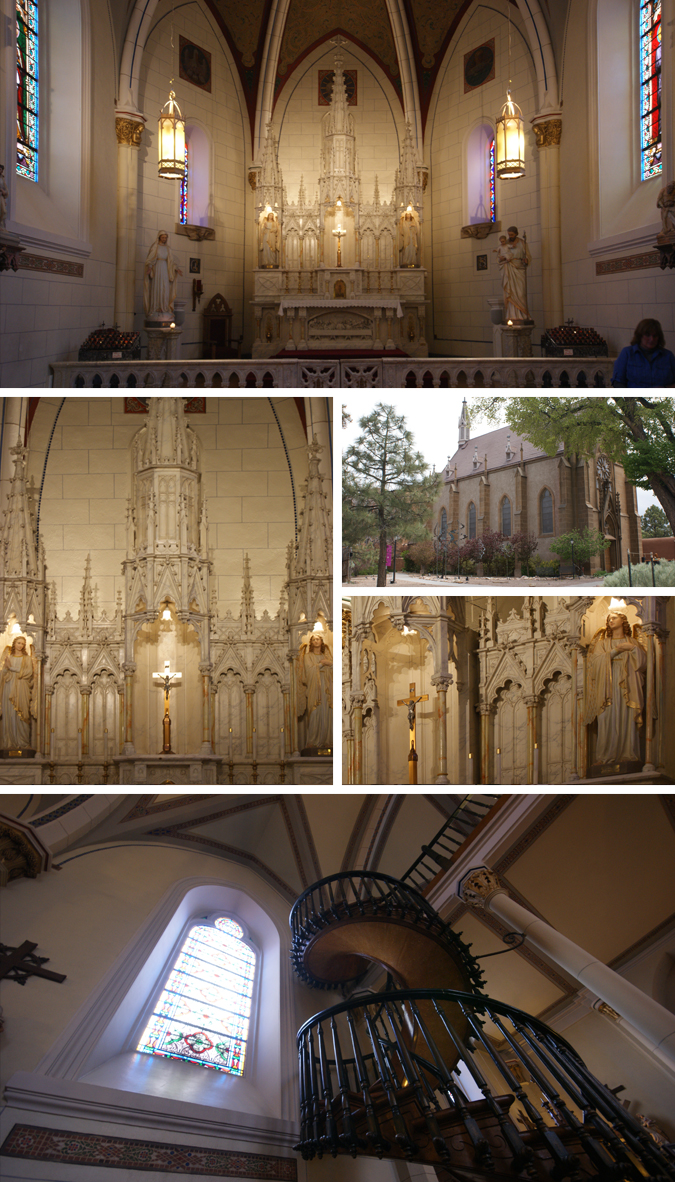