Among the churches that I visited this time, the Saint Miguel Mission in Santa Fe and the San Jose de Laguna Mission in Laguna in the west of Albuquerque were churches in early period. Those charm is the anthropomorphized or anomalousized facade that appears toreflect the landscape. The role of each architectural part is vague and the shape seems to be born by integrating all parts into one whole. A usual artificial image of a building is not observed here and a somewhat organic or biological air resonated with the environment.

Laguna is located next to the main artery in the Southwest, the highway route 40. The church is standing white at the depth of the quiet village where the bustle of the car seems to be a different world. The ancestors appeared in this area before the 13th century. Afterwards they moved to the present location by Spanish forced relocation in 1699. The church was built under the guidance of Antonio de Miranda of the St. Francis Order in about 1700.

More than the facade, the interior stands out compared with other churches.

Geometric motifs based on the view of the world of indigenous people are drawn as high as a chest on a slightly waving adobe's wall so as to invite them to the depth. According to guide Mr. Alberto living in front of the church, the pattern of the arch represents a rainbow and the stairs a tomb. The mural painting is an expression of overlapping of past, present and future succeeded from their ancestry to theri descendants. A pigeon that stays at some places is a symbol of indigenous people. Sometimes shrines are dug in the middle of the pattern on the wall and small statues of Christianity is shrined. I attended at a place where Christianity and local religious view encounters.

Another famous thing is the main altar enshrined in the back of the nave. It is a work made in 1809 by Laguna Santero, an altar producer who had an activity in New Mexico from the end of the 18th century to the beginning of the 19th century. The whole is characterized with a strong red color, and 4 portraits painted on the cowhide skin are divided by the Churriguera style twisted pillar. The child Christ with a cactus in the hand and the roughness and coloring of the decoration patten in the painting at the center generate the air of New Mexico.

On the other hand, when I looked up at the altar nearby, I revived the religious paintings of the Spanish Romanesque style, which I have seen at the Catalunya Museum in Barcelona. It is famous for the collection of the highest peak Romanesque art, and the ”red" color that appears repeatedly and the saints drawn with an Indian-Ink-drawing-like touch were vivid.

When Spain advanced into the American Continent, Romanesque, Renaissance and Baroque art crossed the sea as the cultural achievement carried out in the mainland of Spain. So it might be not surprising to meet similar parts in a place far from Spain. The altar would be the fruition of the result that Laguna Santero learnt the international skills in Mexico where he was practicing. He seems to have overlaid the culture of the American land as the reality on it.

The San Miguel Mission is the oldest existing church in the United States. It is situated on the other side of the present downtown Santa Fe across the river. Originally, this side was reclaimed previously.

Following the exploration of Juan de Oñate who was a New Mexico 's governor, the Tlaxcala tribe from Mexico established a church in 1610 on the religious facility of the indigenous people, Kiva. After being destroyed by the Pueblo Revolt in 1680, rebuilding started in 1692 by the order of New Mexico Governor, Diego de Vargas, ant it was completed in 1710.

The beam is inscribed that adobe blocks were donated in 1710, and after the damage in the earthquake of 1872, a stone buttress that supports the adobe's wall was added by the citizen's donation. So, it is ambiguous about how far the present figure dates back in time.

Compared with the San Jose de Laguna Mission, the interior is modest. But either the beams or altars of the San Miguel Mission are also wonderful to convey the level of culture of that era. According to a literature, the producer of the altar made in 1798 is said as Laguna Santero, while there is the theory that it imitated the church of Bernini in Rome. At any rate, the plant pattern drawn on the board has a New Mexico-like taste. 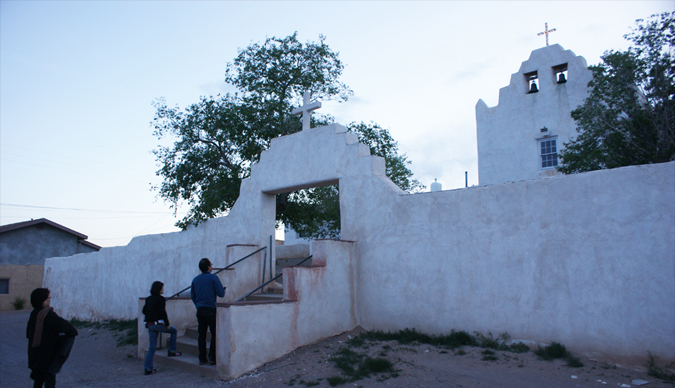