At 7:00 in the night, the public performance of the Neputa begins. Floats start in turn from Hirosaki Park with the calls of “Yah Yah Doh” .

The form of a fan of the Hiroski Neputa gives a gentle and profound atmosphere, compared with the bravery of the Aomori Nebuta and the Tachi-Neputa of Goshogawara.

In addition to the main fan Neputa, small floats like a children float or a neighborhood name sign float accompanied with the fan Neputa is also a pleasure to see. There was even a float that connects baby carriages mounting babies. It is a system composed of various floats including musical accompaniment and dancer, which correspond to all generations and in which everyone in the neighborhood can join.

In the magazine " Hirosaki Neputa Guide 2011" which occupies not only the shop front of a bookstore but also the counter of a convenience store, 51 painters were introduced. A participant talked, "In Aomori where a company contributes tens of millions Japanese yen to production, the painter can live somehow for one year only by manufacturing one set of Nebuta, meanwhile, in Hirosaki where the bearer is a neighborhood association, the payment for a painter is about 500 thousands Japanese Yen for one set of fan Neputa and a painter needs to draw 10 sets for living". The business of a painter is not so easy. Nonetheless, existence of such number of painters shows the richness of the culture of Hirosaki.

Incidentally, I asked to a mediator of a team, " Do you suggest to a painter the theme of this year or the image of painting ?" and he replied that they dare not ask such request to the painter and would never change painter.

As the Hachinohe Sanzya Festival, the vulnerable point of a tall float of Hirosaki is passing under an electric wire and a signal. It is also the highlight scene.

Not only a float oneself goes up and down but also the top part of a fan shape can be pushed down. At a crossing, the menfolk who appeared in the top part break through an electric wire and a signal, using a hand and a stick.

In Hachinohe which is an industrial city and places a industrial university, all the movement of passing under a signal and pushing down is mechanized. Meanwhile, in Hirosaki which places many universities of the humanity field and is the cultural center of Aomori prefecture, people's hand is used in the final instant. The difference of city character has been reflected on the mechanism of the float. Isn't it interesting?

Another highlight of Hirosaki is rotation of the float. In the Aomori Nebuta, the young menfolk of a puller make it rotate with all their strength at the float's feet. In Hirosaki, about 3 persons different from the puller rotate the float running, using a long string from the upper part of float. It is a method that enables to rotate by less dynamic power than the Aomori Nebuta, so women also achieve the role of the puller.

The most wonderful rotater of this day was that of Fujishiro Shinmachi team. While running round the float as drawing the circle, the rotater flied in the air for a moment by centrifugal force.

In the morning of 4th day of the festival when I went to a tourist information to rent a bicycle, the staff looked depressed reading a just delivered fax.

For me who asked the reason, she explained. At the first day on August 1, 370,000 people visited Hirosaki, and, on August 2 when the Aomori Nebuta began, the Hirosaki Neputa had 250,000 visitors and, 200,000 visitors on August 3. On August 4 when the Tachi-neputa of Gosyogawara was added further, the number of visitor decreased even to 180,000 people. Even if such situation was expected since three adjacent cities within 1 hour distance by train held the festival at the same time, the competition was severe.

But the Hirosaki Neputa has a secret plan!. The hint is the rotation by Fujishiro Shinmachi team. How about developing it and adding a spin or a movement of gymnastics like Tkachyov element or Kolman element at soaring by centrifugal force ? It is just the Cirque du Soleil in the Neputa. If realized, I think that the Hirosaki Neputa is sure to take back visitor.

Return to their community after the procession of Hirosaki Neputa 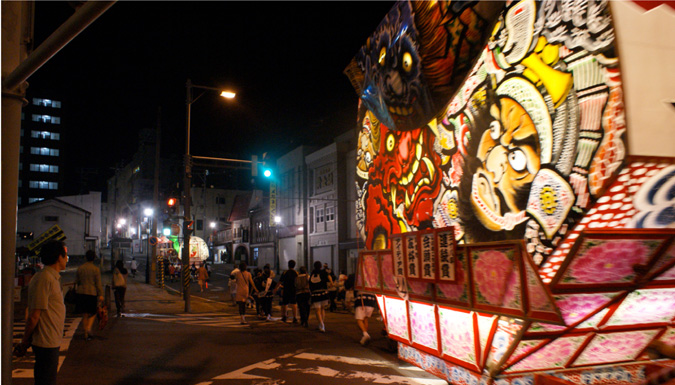