If you are satisfied with only the main performance of the night in the Hiroski Neputa, it is a great pity.

The secret of the Hirosaki Neputa is that bearer is a neighborhood association. The number of the associations that come to join from not only the downtown but also the suburb is 82 teams in 2011. Although all the teams do not necessarily parade every day, 63 teams appeared in the day when I looked at. It is an amazing number.

Although the start time of the public performance is at 7:00 p.m., the true start time for a connoisseur is around 2:00 in the afternoon.

Many floats heading into Hirosaki Park as a starting point appeared on streets about here and there. Although the part of floats were towed to the car, many teams carried its floats pulling by human power, that is, traffic congestion has generated everywhere. To the town which was ruled by the car, the human rhythm has returned only in the day of the Neputa.

Around 5:00 p.m., the surroundings of Hirosaki Park is filled with floats which tightly stood in a row. On the sidewalk of the main street and back lanes, sheets were laid. Some teams made arrangement of the parade and other teams had a good meal before the performance. While the male of the person in charge was giving instructions to children, a high school student was crisply greeting to a senior. The communication scene between the men and women beyond a generation showed the solidity of Hirosaki residents' bonds.

This time and space in which the background of the Hirosaki Neputa was condensed are just the essence of this festival.

It is also time to observe preparations of each team and the backstage of the Neputa.

First of various pleasures is appreciation of artwork of the Neputa. In contrast with vivid expression of night, an artwork under the daylight is unexpectedly gentle. Unlike the time of the main performance, anyone can appreciate each painting in detail up close and understand the painting feature and various patterns.

Since some floats opened the cover and tuned up, I peeped the inside. The frame work of some floats was an old wooden frame and the others was a steel pipe scaffolding covered with expanded metal. The inside where the grill and cookware for the meal were placed was a big space more than I expected. It had just the width of the loading platform of a light truck, so it seemed to be used as a hand-drawn cart for a move except the festival period. The illuminated moving service must be pleasant.

The bamboo blind on the foot of a small drum float was a little turned over. The inside was a big water box filled with cold water and many PET bottles. Even a hydration equipment was also assembled.

In the meantime, it has grown a little dark and the floats have lit little by little. The mood has become elevated. The starting time would be soon.

Just before starting of Hirosaki Neputa 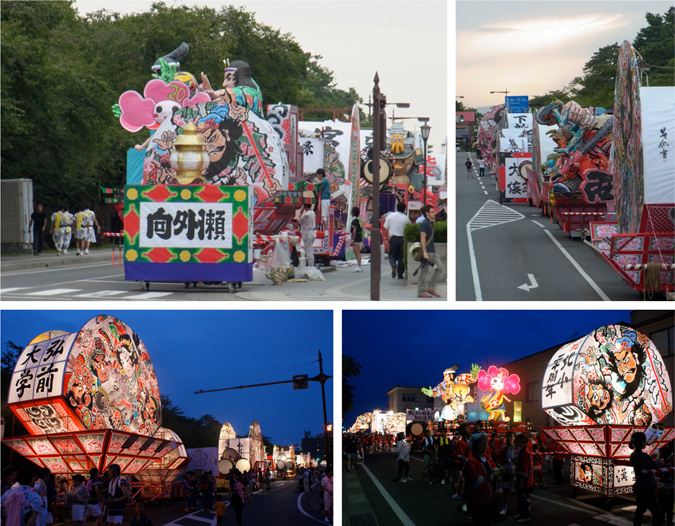