The competition of the urban desig. It was selected as the Third Prize.

The site is along the pedestrian road in the commercial district in the big city.
The area was popular but declining. We proposed an art complex and how to correspond to the
situation of the place.

The center in the site was cut off by an open air plaza that connects to the street. A usual street space is linear with only one directivity, so, a little monotonous. In this plan, the plaza is placed crossing to the street in order to give spatial swelling for the linear street, on vision and motion.

The activities of the interior is overlapped to the motions in the plaza through the glass window, terraces and pedestrian bridges. It’s a production of merriment. The building has many entrances for raising the accessibility that increases closeness and availability. The elements with the image of nature are diffused in order to create the relaxed ambient. A fine curved surface is an expression of human scale. Those strengthen the public character of the institution.

We intended to bring a sense of the wider extent ( towanscape, city, and world) in the site. The street facing to the site was famous as the forerunner of the severe townscape agreement such as color or material of the street side’s facade. But it didn’t fit to the change of the time, and the townscape with old touch stood in a row .

We interpreted the agreement expansively in order to create the vivid ambient.

The exterior wall parallel to the street is finished in natural material or calm color based on the agreement. While, the wall orthogonal to the street is deviated from the agreement, inserting bright colors. When they walk along the street, the building is similar to others. While, when they turn 90 degrees and enter in the site, the impression changes.

A part of the exterior and structure wall are finished in brick so that they could imagine the context of Yokohama city. The structure walls are put along the axis from east to west. It means that the building goes on to the wider world

The architecture exists between continuity and independence for the townscape. At plannning in the commercial area, we intended to accelerate the rhythm of the townscape a little. The wide range from the large scale to human scale indicates the metaphor of the world. 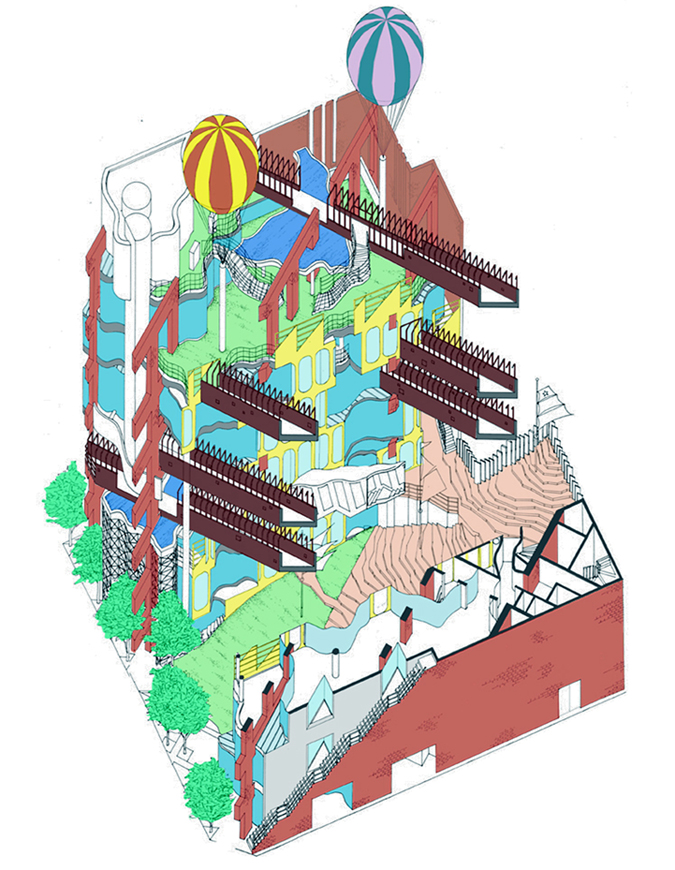