One of the origins of the name of Venezuela is Venezia. It dates back to the 15th century when explorers likened a water settlement to Venezia. In an era of limited information, Venezia Venice, where they had been rarely visited, may have been a synonym for floating places, regardless of town size or level.

Nueva Venecia has the name of the remnant of Venezia.

It was a water village that did not look like Venice. Tasejeras as a port going to Nueva Venecia was a village facing a large brackish lake, Cienaga Grande de Santa Malta, separated from the Caribbean Sea by a narrow land like a sand spit. A motorboat departing from Tasajeras took more than an hour to cross the lake and then enter Sienaga de Pajalal, one of the small brackish lakes that were connected like clusters by narrow waterways with Cienaga Grande de Santa Malta. After a while, Nueva Venecia appeared in the center of the lake, away from the land.

The reasons why the fishing village chose that place were because it was convenient for their livelihood and because it was shallow enough for children to stand in the water so it was easy to build a house. Depending on the circumstances and climate and in the case that they can easily build a house, the place on the water, which is not inconvenient in terms of security and malaria mosquitoes, is a better place to live than to live on land.

Local houses were built on a board floor that was supported by a stake that stands underwater. The roof was thatched or galvanized. The walls were wooden clapboard, and some were painted, but most were exposed to strong sunlight and faded gray. Seen from a distance, the water surface, the sky, and the gray clapboard blend in together under strong unobstructed light.

In addition to local houses, there were about 4 or 5 general stores that were comparable to that in the land village. The office of the telephone company was in the police box. Before the spread of mobile phones, it was an important infrastructure for water settlements to communicate with the outside world. There was also a church and a small soccer ground created by filling the shallows. The means of transportation to get to the neighborhoods and shops that are separated by water and connected by water was a canoe hollowed out from a tree. A small child was dexterous in manipulating it. There were not many people who came and went like land, and even if they moved, their speed by the canoe was slow. Most inhabitants spend their time doing nothing on the shaded terraces of their houses in the heat. It was a laid-back place where time stopped.

The boat returning to Tasajeras left Nueva Venezia at 11 o'clock to avoid the rough waves afternoon. At that time, many sailing boats that I didn't see early in the morning appeared on the lake. It was a sustainable and slow fishery that used strong winds.

How much would their income be? The guide bought dried fish directly from a fisherman in the village. It cost one carbonated drink for three fish. Direct sales prices were ordinary. However, potable water and food except fish must be brought from the land by boat. I was skeptical if they could make enough money for their high food and drinking water cost. For example, they set sail to Tasajearas in the morning to buy drinking water, loading with plastic tanks, and returned to Nueva Venecia the next morning after loading fresh water. Even if fuel costs could be saved, it was a lot of work.

So I was a little surprised by the 2020 article in a newspaper representing Colombia, El Tiempo, that wrote 3000 people living in 400 houses then. In 1991 when I visited, there were only 200 houses. The population of this inconvenient area on the water has doubled in 30 years, despite poorer water quality and lower catches. The reason would be because it is a peaceful place free from crime except for the murder of 39 villagers in 2000 by an invasion of terrorists chasing a traitor? When I visited. The peaceful circumstances might be more valuable than anything else in Colombia, where terrorism was sweeping until the 2016 peace agreement.

Transportation
One hour drive from Santa Marta to Tasajeras, and one and a half hours navigation by motorboat from Tasajeras to Nueva Venezia. It is uncertain to find a motorboat in Tasajeras, so it is advisable to go on a tour of a Santa Mara travel agency.

Upload
2022.07 Photos and text in Japanese version and English version

Nueva Venecia : See the village. In the foreground on the right side, only the stakes of the decayed house remain after the inhabitants have left.

Nueva Venecia : See the village from a distance. The lake, the sky, and the village blend in the same color. 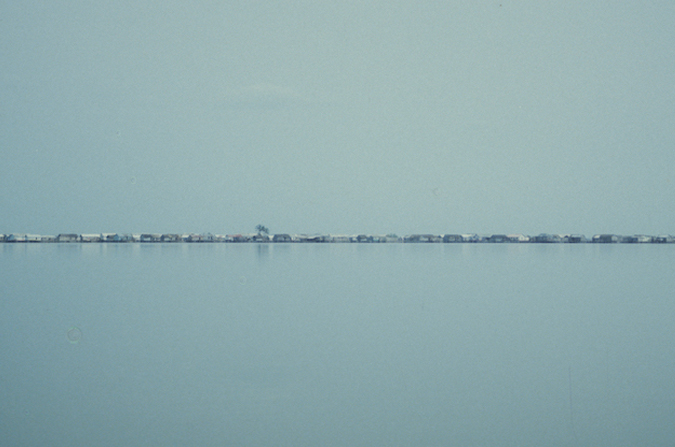 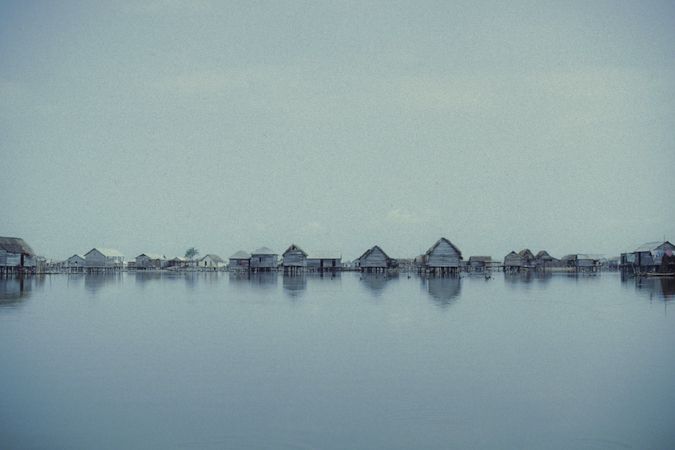 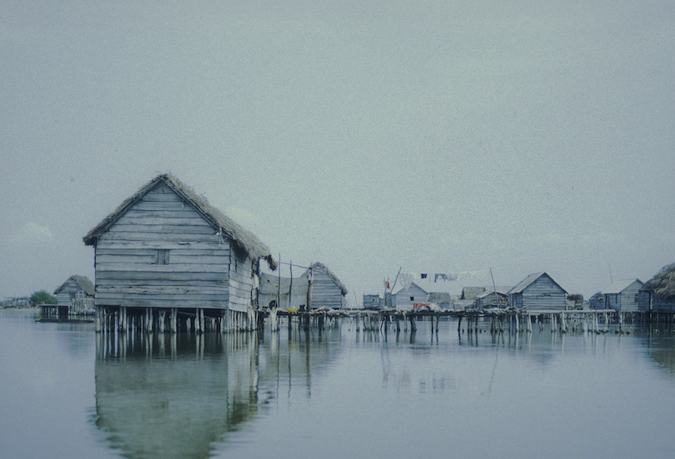 Nueva Venecia : See the village. In the foreground, only the stakes of a local house that inhabitants went out remain. Children are playing soccer on the landfill beyond it. 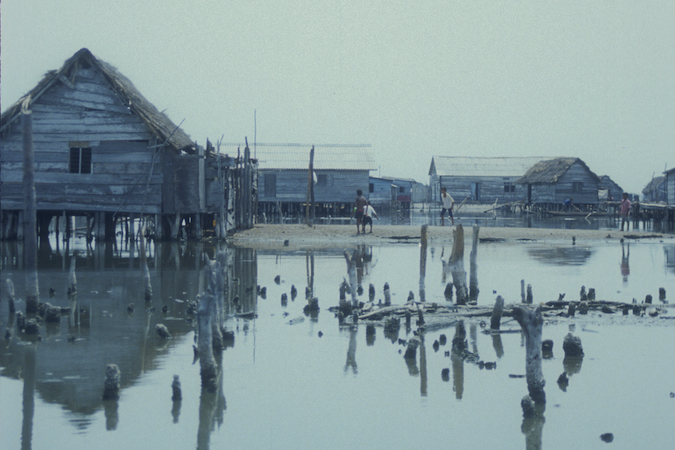 Nueva Venecia : See one of local houses in the village. The fishing net is dried on the terrace. 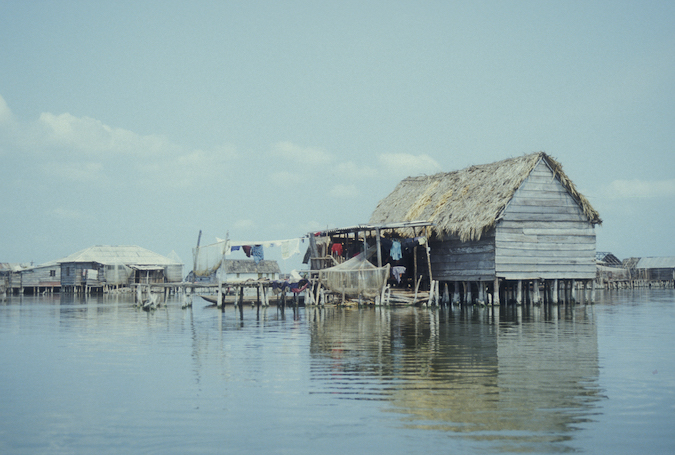 Nueva Venecia : Children are canoeing through the village. 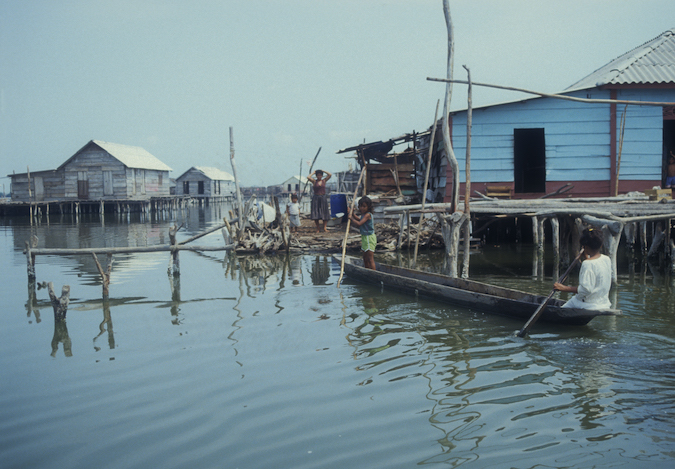 Nueva Venecia : See one of local houses in the village. A child is canoeing.

Nueva Venecia : See one of shops in the village. 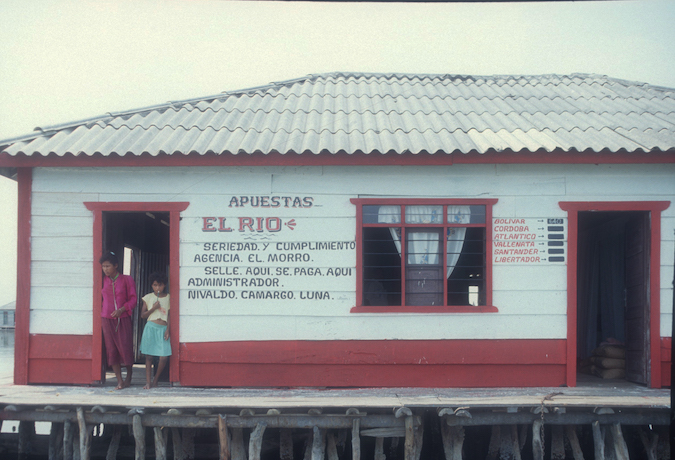 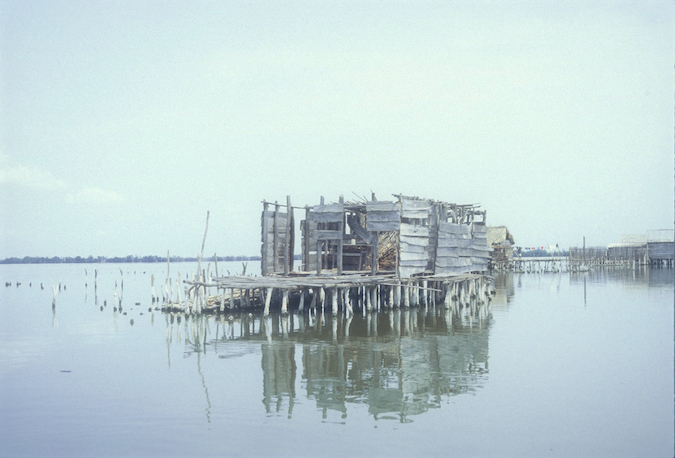 Nueva Venecia : (Left) The area around the church is filled with soil. (Right) In the early afternoon when the wind is strong, sailing boats for fishing start to appear in the lake. 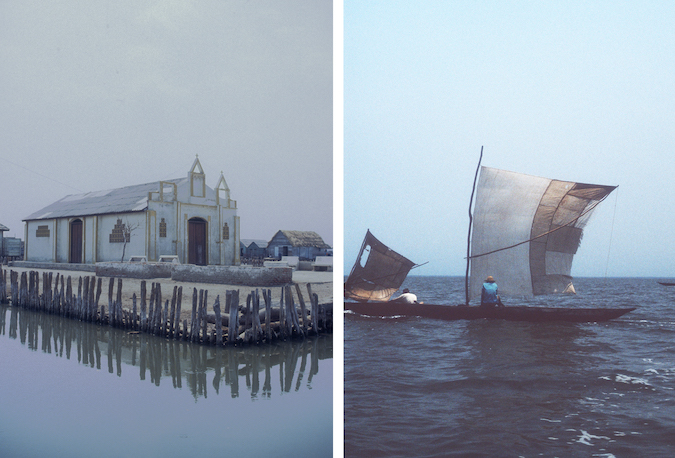