As for distance from the sea for elevation difference, the Sierra Nevada de Santa Malta Mountains are one of the steepest areas in the world. The highest peak with a snowcap in the Mountains is Mt. Cristobal Colon 5775 m high, located about 40 km from the tropical Caribbean Sea. Here is also a place where glaciers remain. The indigenous Arhuacos live on the southern slope. The innermost area of the mountain is a protected area for indigenous peoples, with the Arhuacos on the south slope and the Koguis on the north slope.

Their central village at an altitude of 2000 m is Nabushimake. It means "a place where the sun is born"

The shared truck, which started Valledupar located at the foot of the mountains, climbed the riverbed, ran on the rocks, and went deep into the mountains after the road had been interrupted. After passing through the forest from the endpoint of the shared truck, a meadow came in. Horses, cows, sheeps, pigs, and chickens were free-range in a relieving environment. The dirt road separated by a fence passed though the center of the meadow, but chickens came in as they liked. Beyond free country air, a village surrounded by low stone walls appeared. Inside the stone walls, houses with the waist wall with piled stones, white plastered walls, and thatched roofs were lined up, reversing the ordinary ambient of the countryside, and the quiet nobility stood out. It was Nabushimake as the spiritual capital for the Arhuacos.

To take a photo of locals was prohibited. In reality, the Arhuacos live, wearing an unbleached folk costume, a hat, and hanging two bags with patterns woven on a white background in a cross shape. Its whiteness made them innocent and Nabushimake more divine.

In the Arhuacos cosmology, the Sierra Nevada de Santa Malta Mountains are the center of the world and the entire world. Mountains, rocks, lakes, and plants are sacred beings. In that sense, they may have a character close to Japanese Shintoism.

The Spaniards arrived at Nabshimake in 1750. Valledupar, the town at the foot of the mountain, was founded in 1532, so it took 150 years to reach the innermost area of the mountains, which was 30 kilometers in a straight line. Avoiding the conquers and withdrawing from the plains for 150 years, they could have managed to complete the Arhuacos world in the Sierra Nevada de Santa Malta Mountains. Since the invasion of the Spaniards, there have been various conflicts. In the 20th century, the Colombian government banned indigenous cultures and attempted to develop their area. It seems that it was far from the state that the Arhuacos wished for until they forced the Catholics to withdraw in 1983. The Bell Tower, which stood in a large square, was said to be a remnant of the time when the Catholics were invading.

When I visited in 1991, it looked like a place where the calm air continued for a long time, but they had just regained it a few years ago. And that is still unstable. Even now, when the Sierra Nevada de Santa Marta Mountains were designated by UNESCO as a biosphere reserve, the protected area of the Arhuacos is exposed to various development pressures from civilized societies and climate change.

The shared truck to the town was full of fruits to bring to the market. They gave me a fruit like an artichoke. When peeled, white fruit had a sweet and rich taste like milk sorbet. It was the cherimoya found in high-end fruit stores in Japan recently. It connected them with the outside world and supported their community.

(Note) In the Spanish-speaking countries of South America, indio is not used as a discriminatory term, but indigena, which means indigenous people, is used.

Transportation
3 hour by shared truck from Santa Marta to Nabusimake when I visited in 1991. It is no longer available to tourists and seems to be on foot, donkey or private car from the nearby town of Pueblo Bello. About 5 hours on foot.

Upload
2022.07 Photos and text in Japanese version and English version 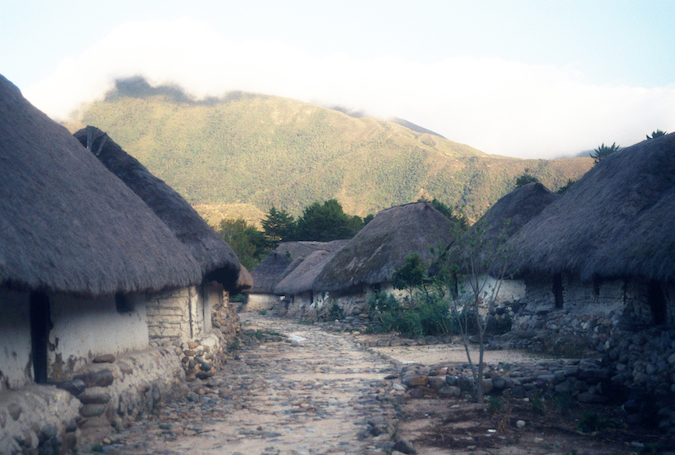 Village of the Arhuacos : See Nabushimake from the top of the hill. Fields and meadows spread out in the forest, and in the center, surrounded by stone walls, houses stand densely. 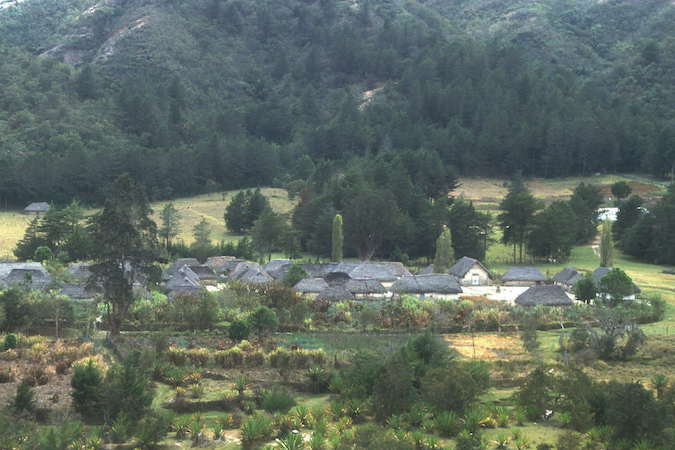 Village of the Arhuacos : See Nabushimake village beyond the pastures where livestock have been grazing. 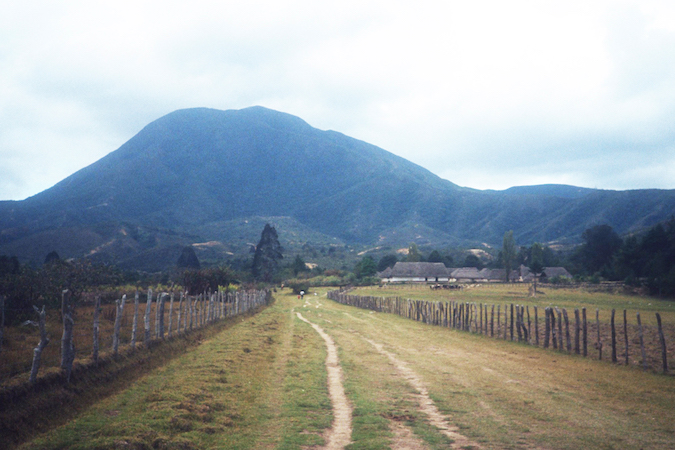 Village of the Arhuacos : See the gate to enter Nabushimake. When I visited, the entrance fee was collected at the management office near the gate. 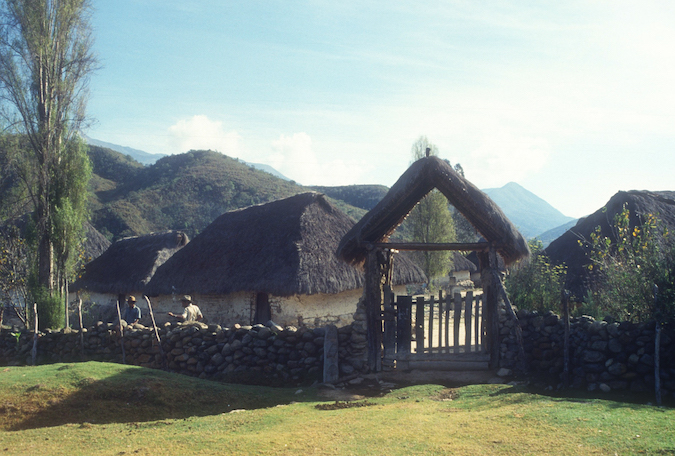 Village of the Arhuacos : See the stone-paved square in Nabushimake village andthe Bell Tower as a remnant of the time when Catholics on the left. 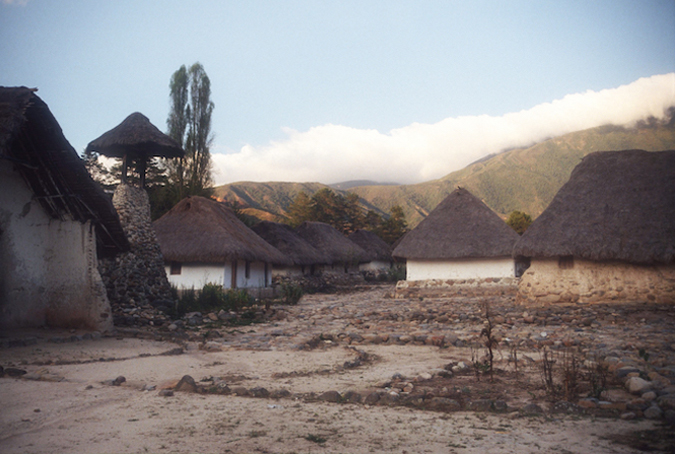 Village of the Arhuacos : See Nabushimake village. The square hipped houses are lined up neatly, and the ground is covered with stones. 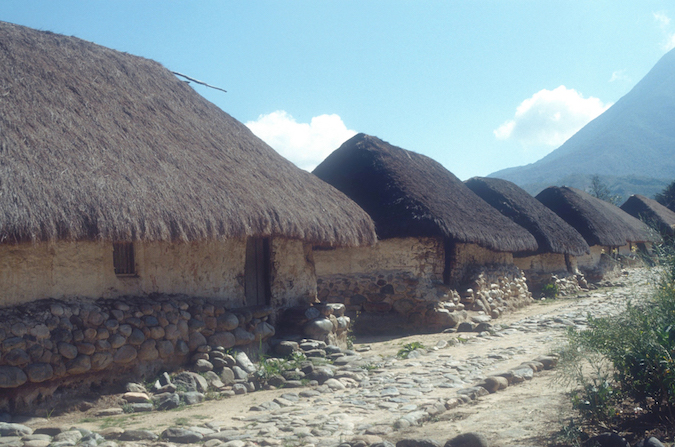 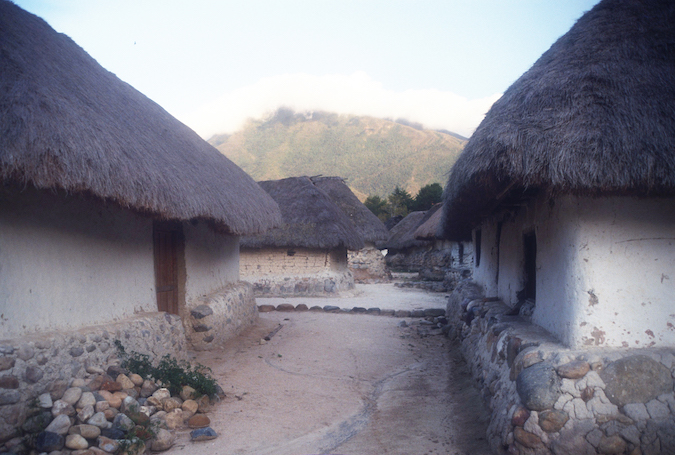 Village of the Arhuacos : (Left) see the detail of the wall and eaves of a local house. (Right) See a waterway that flows through the village. 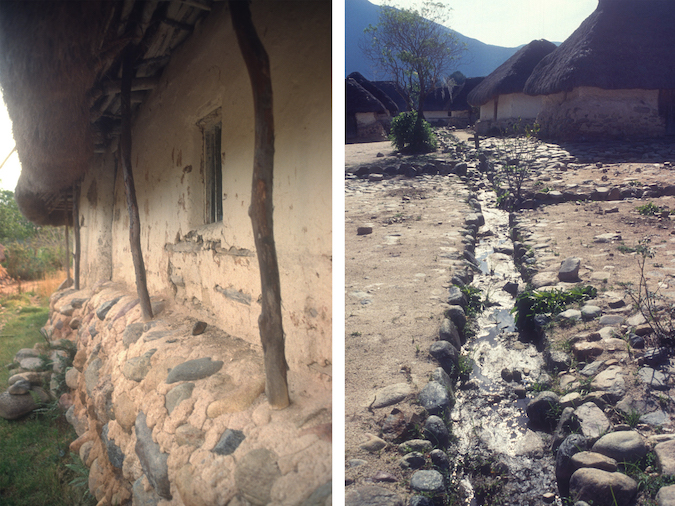 Village of the Arhuacos : See Nabushimake village. The circular hut is probably a ritual facility. 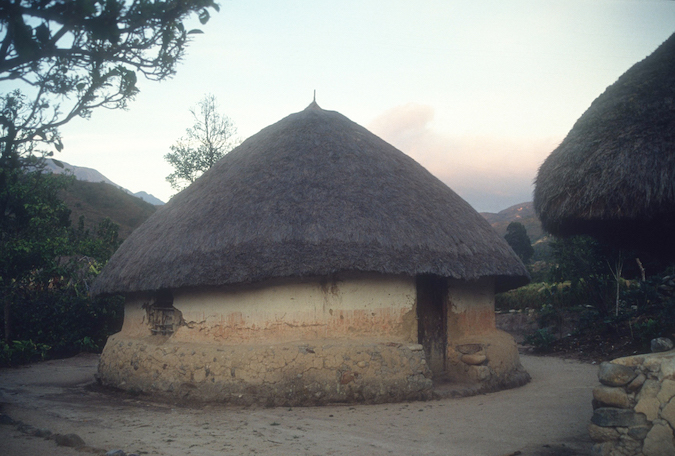 Village of the Arhuacos : See a local house in Nabushimake village beyond the stone walls of the meadow. 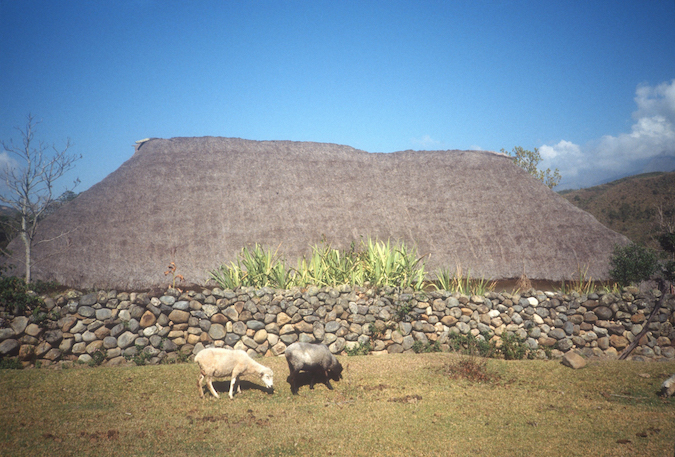 Village of the Arhuacos : After passing through the forest, the gate to the meadow beyond the grassland appears, and beyond the meadow, the houses of Nabushimake are seen. 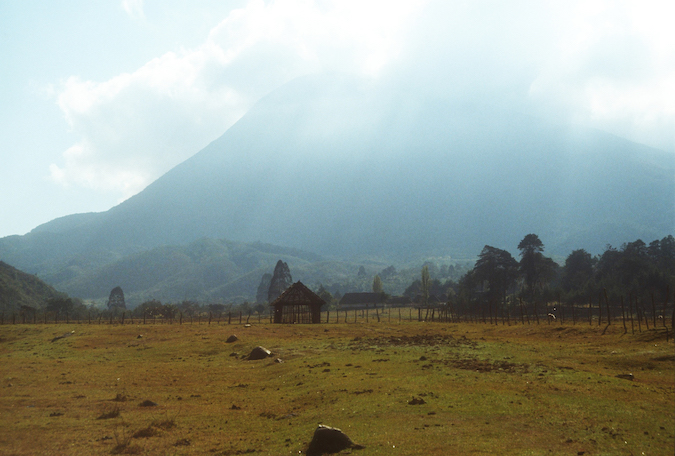