A subject on indigenous people is very difficult to find a correct answer.
Halfway special feeling receives criticism from them. So, in order to avoid from the criticism, a part of people might not dare touch to it like a taboo. I think that, even if their interest is halfway, it is better than none at all. People concerned with Arizona Biltmore Hotel foundation including Albert MacArthur had the same opinion for it?

On various phases of the Arizona Biltmore Hotel, American Indians had appeared.

In the time when the hotel constructed a golf course, the hotel employed them for the construction, based on the legend that Indians had used here as the hiding place in a battle. In the opening ceremony in 1929, a Hopi was charged with a role to hand a rose bouquet and a key of the hotel dropped from the airplane to the manager .

The relation with indigenous people can also be reflected on the collaborators of the hotel design.

The engraved piece, which creates the grace of a concrete block and has become a logo of the hotel now, was designed by sculptor Emry Kopta.

Kopta had studied in France and, when he returned from France, John Lorenzo Hubbell, who had managed a Trading Post in the Navajo Reservation in that time, invited him there. He had been attracted to Indian culture and had lived in Hopi Reservation for 12 years afterwards. The sculptures, which modeled on the Hopi indians, became his best-known work and they called him Rodin in the Southwest.

When MacArthur asked the design to Kopta, he had already left the Hopi Reservation. So, MacArthur might see the sculptures of the Hopi somewhere. The motif of a block pattern itself isn't related to the Hopi tribe but the trunk of a coconut. However, the fact that the hotel featured him makes follows indigenous culture like a shadow.

The another one is painter Maynard Dixon.

Two big mural paintings decorated in the dining room are his works. He also stayed in the Hopi i Reservation for 4 months. Their view of the world which he saw is a theme of the mural painting.

The mural painting in the upper photo is a work that became a special feature at the opening time of the hotel. The father sun which emits light and the mother earth which stands in front of a corn. Rain falls on the right hand of the mother who rules growth of a corn as the symbol of a life. Under her feet, women hold a vessel containing corn or grind corn kneeling down. In 1949, another mural painting of the bottom photo as a pair was completed. The production had been suspended due to the Great Depression and three years had gone by since Maynard's death.

The Southwest had came under the spotlight as a tourist destination by opening of a railroad. One of the exoticism, which invited people to a distance place, was Pueblo Deco which connected Art Deco with indigenous and colonial culture of the Southwest. Even if Maynard's work is also in extension of exoticism, the expression like a fable revives the indigenous culture’s long time which goes back before a colonial era. The accumulation of time was added to the hotel.

In that way, the hotel acquired multiple connections with indigenous people and the depth impossible for hotels which merely copied the design.

As a collaborator, a person whom we can't forget is Wright.

In the entrance, a visitor must have a strong impression to the stained glass with a cactus motif. The wife of Wright produced it based on his work designed in 1927 and presented to the hotel at the re-opening time in 1973. The sculpture in the garden (the photo on the left side at the fourth row) is also his work. It was a re-production of the work discovered by chance and was presented in 1985.

The collaboration with the Hopi tribe would be within MacArthur's concept. But, how would he regard that the works by Wright, with whom relationship became iffy, occupy the symbolic places of the hotel as if he had designed the hotel ? Probably MacArthur is angry in the grave. 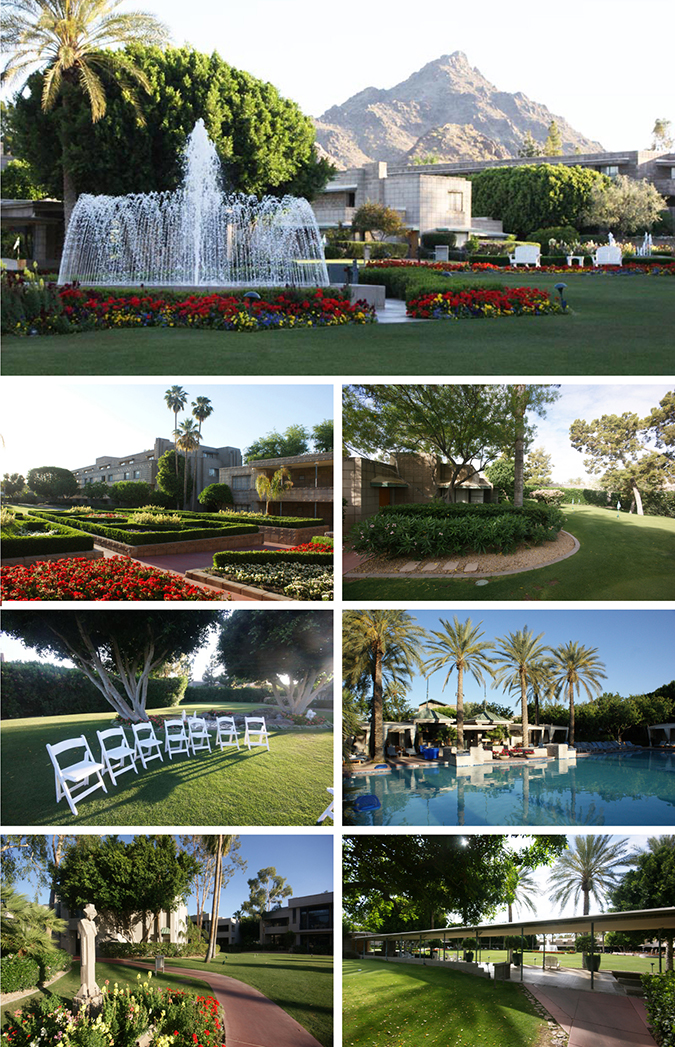 Arizona Biltmore Hotel (1929) - Collaboration with the indigenous culture and Wright