Boller Brothers, who opened a design office in Kansas City, left behind a lot of theater architectures in the United States in the first half of the 20th century.

Their style varied according to the place. The Lensic Theater completed in 1931 is the fusion of the Moorish style and the Spanish Renaissance Revival style and the El Morro Theater in 1928 is the Spanish Colonial Revival style which had swept the American continent during the colonial period, and the Kimo theater in 1926 is the Pueblo Deco style which the Southwestern culture and the Art Deco merged.

Such explanation on the styles is quite difficult even for people involved in architecture to be strictly distinguished. Aside from that, it is the style based on indigenous culture and colonial culture which were "the ground" in the Southwest of the United States.

Now, the Lensic Theater, which was renamed the Lensic Performing Arts Center, is 2 blocks from the main square of downtown Santa Fe. The noise by a crowd doesn't reacch at this place. Incidentally, the origin of Lensic is a combination of the initials of the name of the theater owner’s grandsons.

At the time of opening, it was wrote as "the most wonderful theater in the West". In the Pueblo style townscape that volume chunks are piled up, the delicate elements like the small windows of the arch, decorative grille of cast iron, roof handrails featuring a dragon and ornament of the roof imitating a balcony reflect elegance.

Entering the porch, the restrained Renaissance style exterior appearance changes into the gorgeous Moore-like design. The entrance is designed with a combination of miniature pillars with a cloud-shaped arch and the ceiling of an arabesque pattern finished in red copper color, green and blue color. The lobby is a bit simple, but entering in the autidorium, the luxurious Moorish pillars and proscenium arch appear.

Here, a visitor jumps to a distant Arabian land and enjoys a play and a movie. At the time of opening, a tapestry of stripes that imaged a tent of the desert was hung on the ceiling and the shadow of clouds was projected when the light was turned off.

In 2000, with extensive renovation, modern equipments were equipped. The quality of the theater has risen, and the theater has come to enable to meet the demands from the performances of first-class artists to the high school prom. The latest equipment is indispensable in order that the architecture of 70 years ago survives as the theater of the town, but Arabia's dream seems to have gone away because the air conditioning and lighting finished in black are installed under the ceiling even if the sense of existence is modest.

The El Morro Theater is located in downtown Gallup, close to the state border with Arizona. The town flourished as a relay point of Route 66 and was called the Indian Capital of the World because the Indian reservations spread to the surrounding area.

One of the remnants of that lively era is this theater.

The facade facing the main street is composed of the upper part, on which twisted pillars and waved parapets are designed in the Spanish-like style, and the ground floor, which wall is finished with a geometric pattern’s brownish-red and light blue tile of the Art Deco style. Since both styles are no fused and arranged separately, it seems to not be included in the list of the Pueblo Deco style.

The height and position of the exterior walls are arranged at the same position as the surrounding buildings. So, only the facade design is a highlight. The impression of the theater is a bit flat and quiet compared to Lensic Theater in Santa Fe and Kimo Theater in Albuquerque designed by the same architect.

The difference would be based on the gap of urban disparity and the construction budget between the central city of the state and a remote town ? 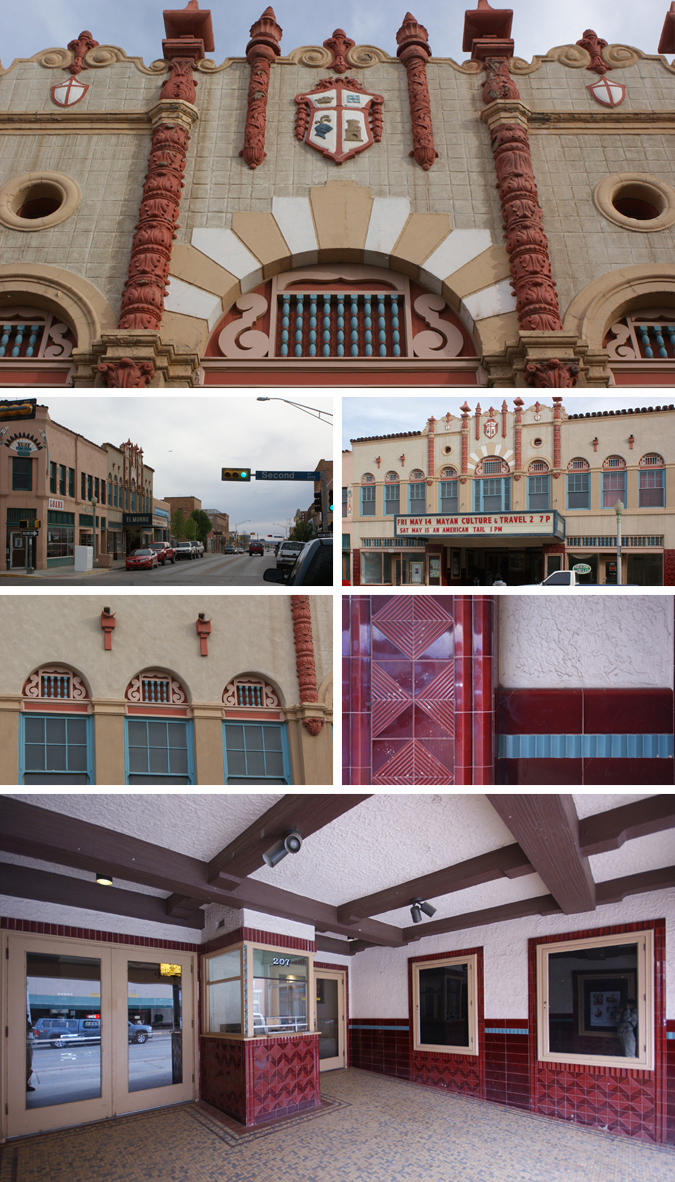