The number of the libraries which steel king Andrew Carnegie presented is 1,600 or more even just in USA. I had thought that a charitable person like him preferred a magnificent architecture which let citizens know his achievement, but the libraries of Phoenix and Tucson gave me a perfunctory and modest impression in spite of the classicism and symmetry form common in a monumental architecture.

The Tucson Carnegie Library was completed in 1899 and the Phoenix Carnegie Library in 1902. So, at first, I speculated that the quality of the architectures was related to that Arizona was a remote district in USA in those days. The splendid answer to the question was " Free to All; Carnegie Libraries & American Culture, 1890-1920" written by Abigail A. Van Slyck.

It was 1881 when the first Carnegie Library was presented to his home country, Scotland. Later, libraries came to be built in USA. At first, the architecture was designed elaborately based on the classism and suitably for the symbol of a town.

Its line had changed from a charitable person's donation without a distinction to a pragmatic present based on a clear standard since around 1899. The standard was formally established in 1911. If the population of a town is over a thousand, 2 dollars per one resident was presented anywhere. The condition was a contract that a town would offer a site and contribute operational expenses equivalent for 10 % of the amount of donation from a tax. The reason of the change was the criticism to Carnegie on the source of funds and his skepticism over the promiscuous charity to the poor.

Such an attitude influenced how to build an architecture. The specific architects, who followed the library model advocated by Carnegie and completed architecture exactly without excess of the budget, were selected rather than architects who created a new design. Therefore, the design was still based on the classism but often became neither good nor bad. There were some exceptions that a grand architecture appeared because a town added a construction cost.

The shabbiness is emphasized by the reduction of the size and the exterior appearance by limited ornaments as well as the ill balance between modesty of the architecture and the monumental methodology of the previous century like symmetry and the baroque style disposition that put the architecture at the center of a big garden like a villa.

However, it seems to be rash to estimate the Carnegie Library by only architectural design.

The library model which Carnegie endorsed included the planning to consider for a user, open stacks that a user could directly touch to a book or expansion of the children space. That seems to have been more pioneering than general library of those days and have become an institution where the program won the design. The new program also supported women’s social progress like a place of assembly for women or creation of a job.

Now, 1300 libraries was used as a library while the Tucson Carnegie Library that one century has passed after opening was renovated into a child museum and the Phoenix Library into a branch of the state library. It is difficult to confirm the precise detail in the completion time actually. The Phoenix Library is said to have introduced a caster-type bookshelf and established a reading room for women, and the Women’s Club contributed to attract the library and a librarian was woman at the opening time.

In the era when the view on the architecture as an existence beyond a human being had still lived, the Carnegie Library might bring an architecture close to a human being. It is also sugeestive that the functionalism to integrate the design and the function appeared at the time when donation of the Carnegie Library ended. While its design reflected a classic architecture unrelated to a modern architecture, it preceded modernization in the point of view of function. Consequently, it might raise the ground for a society to accept the functionalism or modernization through a library with high public interests. 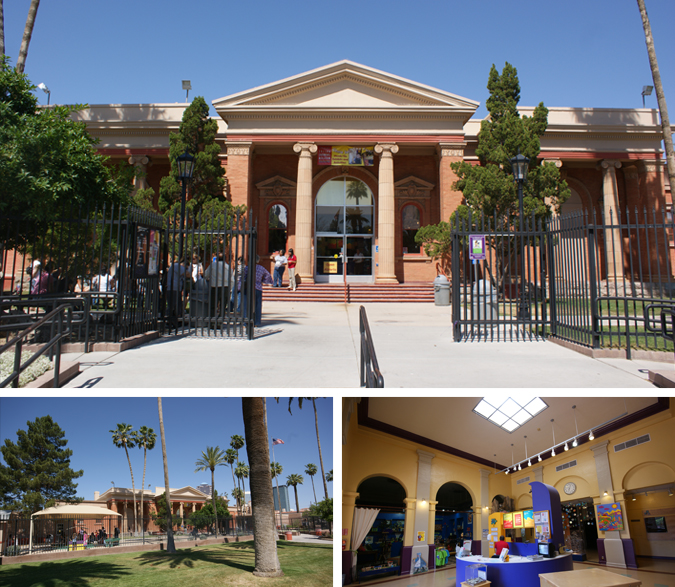