Among various dances performed in "Otori", the most wonderful dance was "Tora Mai (Tiger Dance)“. 5 or 6 teams danced in the long procession. The fact that this number of Tiger Dance teams was active showed profoundness of Hachinohe.

It is common in other places that a pair shows the Tiger Dance or Lion Dance wearing animal costumes. However the dynamics of this Tiger Dance in Hachinohe was outstanding among such dances that I had seen.

In the beginning when I was watching a few tigers by some teams which ran through and turned round and round drawing a circle, I thought that their sales point was physical strength based on youth. However, that I was attracted strongly was the instant when they lied on their stomach on the road and rolled over on their side. It looked like a tiger that scrapped the body to the ground and tried to relieve itching.

Rolling over on the side alone is not so difficult, but it is quite difficult for two dancers to roll over in total synchronization putting on costumes so as not to be entangled. But, here they didn’t make feel such uneasiness. The color of their costume was yellow and the drawer that they worn had a striped pattern of the tiger. So, from a distance, it was real as if a tiger had rubbed its body against the ground and squirmed.

Then, they got up, one of two performers rode on another performer’s shoulders, they rose high as if a tiger had raised a cry. It was the first time and unexpected for me to see that a pair of two performers danced moving not in the horizontal direction but in the vertical direction. I admired very much the possibility of dancing by two people. At that moment, I realized the reason why most of dancers were young. Because, it was not easy for heavyweight adults to roll around lightly and ride on their shoulders.

Being chewed by a tiger brings state of perfect health and clear-thinking, so, along the street, families stretched out the heads of babies and small children to a tiger. Some babies burst into tears. The tiger is true to nature for an adult, so it must be just real for a baby.

According to "The History of the Hachinohe Sansya Taisai Festival" (written by Miura Tadashi), in the diary of 1821 by Toyama family who were a Hachinhe clan is a description about the Tiger Dance performed in Same fishing port in the eastern Hachinohe. Even now, it is an eye-catching dance. So, at that time when there were a few entertainments, how much would it fascinate the audience and affright not only a baby but also the young and old men and women ? 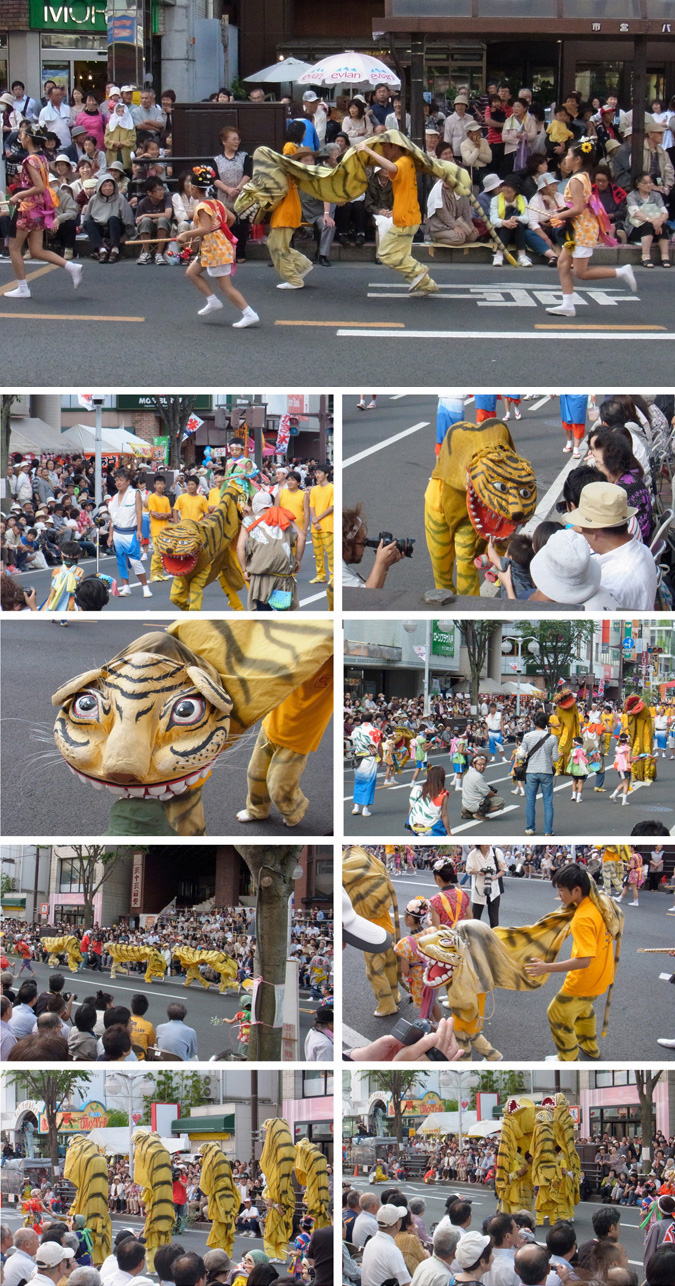